Since a very young age, I have been interested by the diversity of life, especially by those organisms so abundant and diverse, and yet so small that most people only perceive as a nuisance: Insects! What a captivating group! Over the years that I have been observing and studying them, I have learnt that insects are ecologically important, manifesting a plethora of behaviors, from the simplest to the most complex sociality. They are so diverse that as of today, nobody is even able to say precisely how many species have already been described, much less how many there are.

Over the years, I have focused on one specific group, probably the most fascinating groups of insects: ants! To the abundance and diversity of insects, ants along with a few other groups have reached a different level of organization, eusociality. Social insects, and especially ants, rule over the arthropod world, and even influence the evolutionary trajectory of plants, fungi, bacteria, or even large animals such as reptiles, birds, and mammals.

My research seeks to explain how a group like ants became so diverse and where their richness is distributed? What factors have shaped their current distribution? How do human activities such as biological invasions, habitat disturbance, or climate change alter their richness and species composition? How do ants impact the distribution, behavior and evolution of other organisms? And last but not least, how can we use ants to improve conservation programs through the integration of arthropods? 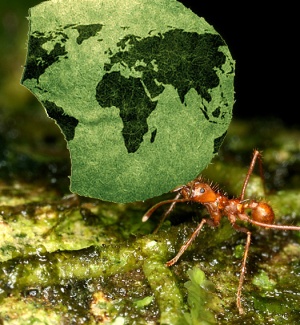 Our understanding of large scale diversity patterns, including at the global scale, has considerably increased over the past few years, thanks to the elaboration of mega-databases and bioinformatics.  Yet, the studied patterns are limited to a few vertebrates and plant groups, ignoring arthropods entirely, even though they represent the vast majority of described organisms.  Using ants, which are known to be one of the best surrogates for other insect groups, I have developed several mega-databases that allow the study of macroecological and evolutionary patterns. Through the study of latitudinal gradients of species communities, generic diversity, or hemispheric asymmetry in species richness, my work explores the diversity gradients of ants and the factors that explain the observed patterns. By developing the largest ant species distribution database , we are now ready to address important questions in ecology, evolution and biogeography for insects!

Ecosystems, as we presently know them, are the result of long and complex events that drive taxa to extinction, dispersal, or to diversification.  To understand the present, one must know the past. The study of fossils, some of them as old as 100 My, provide important information for the reconstruction of historical biogeography and evolution.  The compilation of existing information is an important first step to allow comparison with modern distributions.  Our results highlight the importance of past connections between bioregions and the importance of extinctions in shaping modern communities.

While insects represent the large majority of described multicellular organisms, they have been mostly ignored in conservation studies.  Large databases on ant distribution allow us to identify regions of the world that are in urgent need of scientific exploration.  Recognition of these areas is especially important to develop new conservation approaches because peaks of insect diversity or endemism in insects do not necessarily coincide with other traditional organisms.

While species list have long been compiled for most groups of vertebrates and plants, synthesis of arthropod information is still far behind. In this context, creating species checklists is crucial for field biologists working in a given area of the world as well as for biogeographers attempting to compile data on specific groups of organisms on a large scale.  Working in both disciplines, I fully acknowledge the usefulness of these publications and I have led and contributed to such endeavors.  Here are a few recent examples for the ants of  China, North Carolina (USA) and the Solomon Islands.

Most insect species may still be undescribed.  The description of new taxa is important for the understanding and protection of biodiversity, especially at a time when habitats disappear much faster than we can survey them.  When the opportunity presents, I very modestly contribute to enlarge the number of known species.  So far I have been lucky to participate in the description of a new Japanese species of Pachycondyla, and recently in the discovery of a new Bannapone species from China, one the rarest ant genera in the world!

2) CONSEQUENCES OF ANTHROPOGENIC CHANGES ON BIODIVERSITY

One of the biggest threats to biodiversity is paradoxically the introduction of new species into an ecosystem. Some of these newly introduced species show ecological characteristics that allow them to displace native species and to weaken ecosystems. Monitoring the consequences of invasions is crucial to understand the processes by which the invasive species become dominant. The Asian Needle Ant, is an unusual species that invades disturbed and undisturbed habitats with dramatic consequences for the native fauna and flora.  Understanding the biological traits that give invasive species ecological advantages over native species represent an important goal for community ecology and biological invasions.  In the meantime, our ability to predict future invasions and range extensions of current invasions is critical in order to prevent new invasions and to minimize negative impacts associate to them. The following examples for the Argentine Ant, Linepithema humile, and the Asian Needle Ant, Pachycondyla chinensis, represents two attempts of future distribution models based on ecological and climatic factors.

Urban ecosystems are expanding rapidly, and for many city inhabitants most of their interactions with nature are limited to urban-adapted species (i.e., pigeons, cockroaches and rats).  In this context, it is crucial to understand what native fauna and flora can survive in such highly disturbed habitats, often colonized by numerous exotic species.  I am interested in the spatial and temporal effects of urbanization on community structure and richness.  Urban habitats represent a mosaic of habitats in which the level of disturbance varies and thus might affect species composition differently.  Some of these habitats present new abiotic conditions for a given region and select for a specific subset of adapted species.  Using a study realized in the 70′s, I investigated the effect of urbanization on an ant community over a 40-year period. Those interesting results show that despite community changes and changes in species composition, urban habitats could still host a rich ant fauna, potentially being considered for conservation purposes. 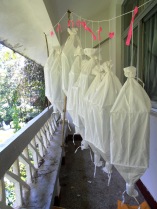 Monitoring community changes through time and space to understand ecological mechanisms that sustain diversity is one of the main goals of ecology.  However, the results are highly influenced by the sampling methods used.  I am interested in the use of methods that not only provide the best picture of community composition at a given time, but also introduce the least sampling bias, in order to compare multiple sites with accuracy.  To this end, I have promoted the use of a specific methodology for Winkler extractors, one of the most commonly used and efficient sampling methods in entomology. Give it a try!

As social organisms, living in a centralized nest and sometimes exhibiting territoriality, ants have developed astonishing behaviors and strategies to maximize the use of resources available in their environment while dealing with constraints such as competition, predation, or simply getting lost.  The two examples of tandem-carrying in Pachycondyla chinensis and of intraspecific thievery in Ectatomma ruidum illustrate perfectly how organisms can maximize food intake (benefits) within environments characterized by fluctuating foraging costs.